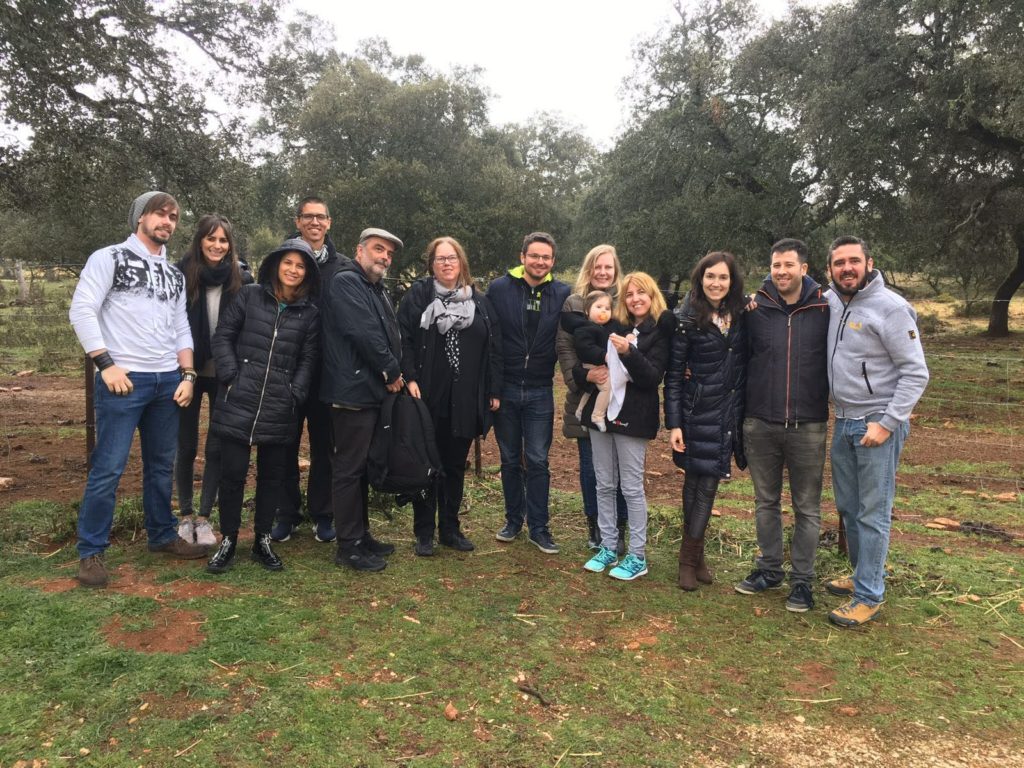 The TLR February day trip was definitely one to be remembered! First stop on the itinerary was the Reservatauro Ronda, which is a breeding farm of fighting bulls and pure Spanish horses located in the Nature Park of Sierra de las Nieves. Before arriving, I wasn’t too sure how I would feel as personally I’m not into bullfighting and never will be. However, I thought it would be interesting to see how the bulls live, out in the countryside before being potentially sent off to fight.

Unfortunately, we didn’t have much luck with the weather and it was absolutely freezing cold! Nonetheless, not being defeated by the rain we hit the dirt track on a tour around the farm by our lovely guide Paki. First up we had the opportunity to see the Testing Bull Ring where the selection of the cattle takes place. When the calves are 2 years old, they are tested for bravery and aggressiveness. The cows are tested to find their suitability for breeding to maintain the viciousness in the strain.

The bull carves can only be tested once, by a man on horseback using a pic or vara, a long lance like vaulting pole with a steel tip. This is because the whole ritual of bullfighting is built on the fact that it is assumed that the bull is having their first contact with a dismounted man in the ring. When in the ring, Bullfights can only last for 20 minutes maximum, as the bull will eventually learn to hunt the man, not the cape. Bulls can be sent to fight when they are at least 4 years old and have to weigh a minimum of 460kg in a first-rank bullring.

After the tour of the grounds, we had the chance to meet some of the biggest horses I have ever seen. These horses were pure breed Spanish stallions, which explained the size! The stable is where the bullfighter trains daily in the practice ring and we had the opportunity to practice our own bullfighting techniques using the capote (pink cape) and muleta (red cape). The man himself Rafael Tejada, a bullfighter, and the ranch owner showed us some skills and allowed us to pick his brains about the world of bullfighting. He said one of the greatest feelings in a bullfight is when the bull can be ‘pardoned’, for showing outstanding bravely and strength, so the bull is allowed to return back to the ranch and live a happy and peaceful life. This admittedly doesn’t happen often, in the Reservatauro ranch there was only 1 pardoned bull living there.

After this we had the chance to try a couple of bottles of local red wine made in Ronda and take advantage of the breath-taking views of the mountains. 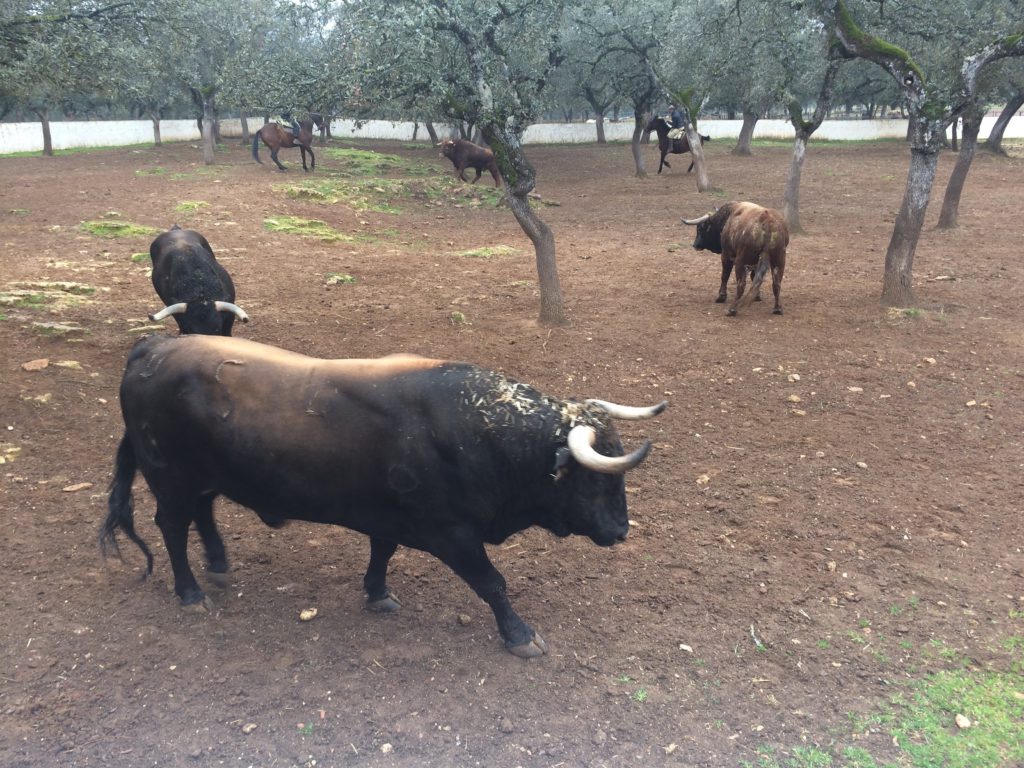 This brings me onto Ronda day trip part 2 … Ronda itself! We had an expert member of the TLR family with us that day, Victor from We Love Malaga walking, tapas and food tours. Luckily Victor knows Ronda like the back of his hand so he knew exactly where to go for some delicious tapas. After our “quick” lunch (it ended up being a typical Spanish lunch lasting 2 hours of course!) we finally commenced our walking tour of Ronda around 5pm. This actually ended up being perfect as the sun finally came out and we were able to see Ronda as the sun was setting! 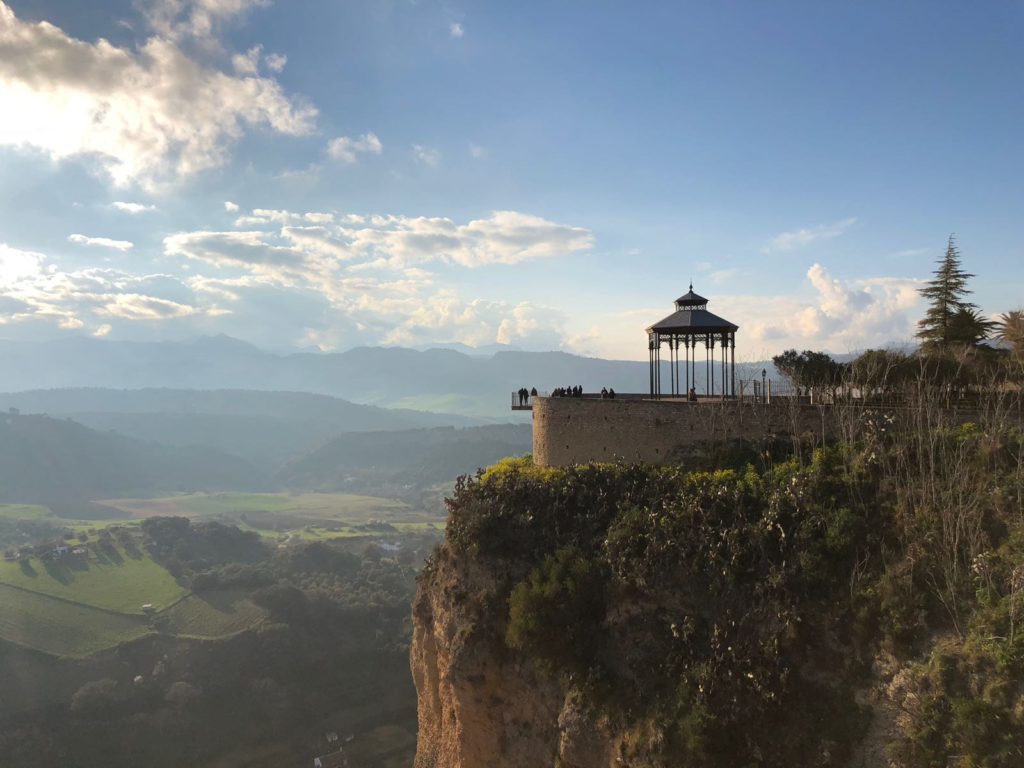 Victor: ‘ To me Ronda is special, it allows you to journey through hundreds of years of history as you explore the highlights within beautiful Ronda. I made it my priority to lead the TLR group on a fascinating walk around the area which is a labyrinth of hidden streets, wonderful architecture and charming squares. Ronda is a must for anyone interested in Ronda’s architecture and history, it’s so easy to walk around and see the most interesting parts of this Andalusian hidden gem. It was a great day out with the TLR family and getting to see Ronda at night is one of the most spectacular sights in Andalusia!’ 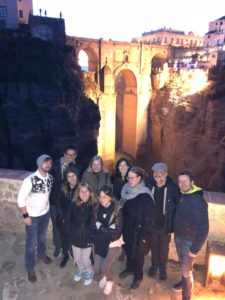 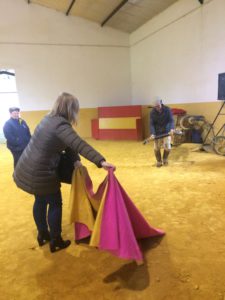 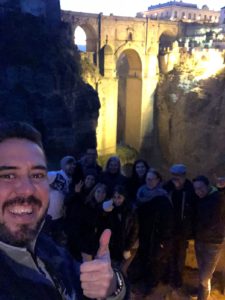 We learned a lot that day about Ronda and its history which was really fascinating and the lovely Victor took us to a few hidden gems which we had very little chance of discovering ourselves if left to our own devices! All in all, it was a great day out and we fully made the most of it, even if we were staggering home by the end of it (and not in a drunken way!).

Originally from Nottingham in England, Lizzie is now currently working for TLR looking after the marketing and communications of the company. Also, Lizzie has been teaching English in Malaga for 1-year via the internet to children based in China! Soon Lizzie will be returning back to England to embark upon her next journey, following her true passion and undertaking a Masters Degree in Wildlife Biology and Conservation.