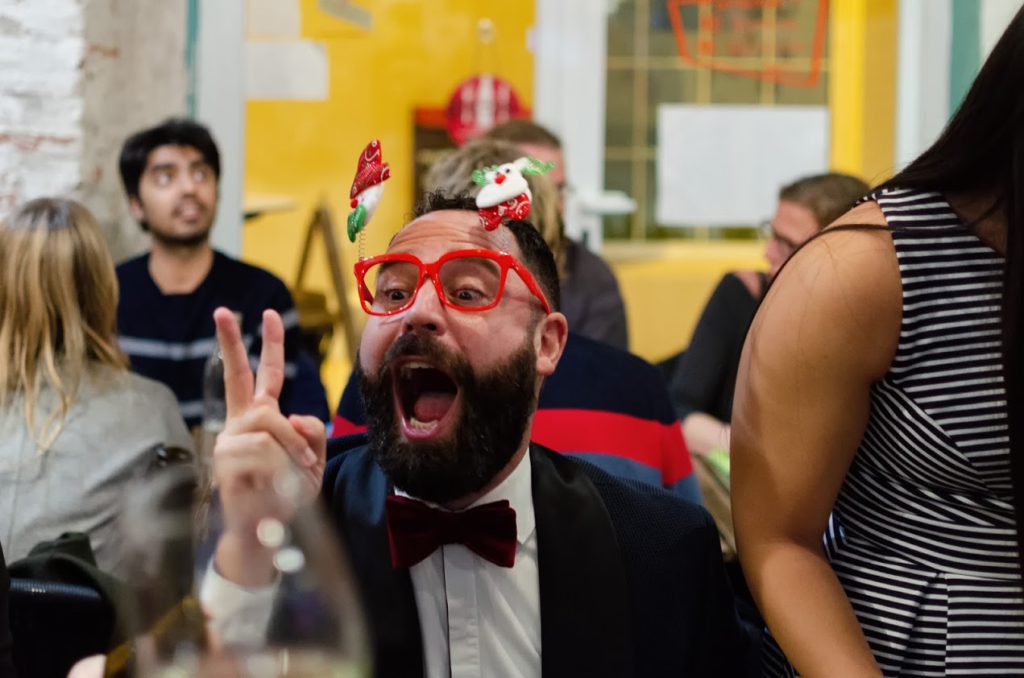 Even though it’s often the warmest city in continental Europe during the winter, there is plenty going on for Christmas and New Year’s in Malaga. If you’re like some of us at the TLR coworking and have come here to escape the cold, you might find the blend of palm trees, beaches, and elaborate Christmas decorations pretty charming. Besides, Malaga has exceptional traditions for the winter holidays, so it’s a great budget-friendly destination, whether you’re after a quick winter escape or have relocated to Southern Spain.

Four of our amazing TLR coworking family members, who are also local Malagueños, took time out of their busy schedules to tell me about Christmas and New Year’s in Malaga. They revealed how we, expats new to the city, can have a great time over the holidays, what traditional foods we can treat ourselves to, and even talked about two winter celebrations unique to the region.

So, if you’ll be around for Christmas and New Year’s in Malaga, we hope you can use this as your guide to having an amazing time over the holidays.

Rocio has a big family and loves Christmas. She and her incredible sister Julia are winter holiday authorities and we are so happy that they agreed to share their knowledge with us! Rocio is a community manager and a social networks specialist, with a background in law.

Victor is famous in all of Andalucia! He’s a brilliant tour guide, whether you are looking to soak up the region’s rich historical past or want to know the best places to shop at the Sunday market. Victor’s blog WeLoveMalaga and his Instagram account are great resources for both Malaga and Spain.

Carlos, one of the youngest members of our TLR coworking family, has so many cousins that he has never even counted them! So he knows all about the traditional way, even though he is a high tech developer and a badass biker.

Alejandro is in charge of supervision and control of different sales channels, trade marketing campaigns for one of Spain´s most popular magazines. But he is also passionate about the environment, his family, and professional photography. He just had his first baby daughter, so now he gets to appreciate Christmas in a new light – from her perspective.

The Christmas lights in Malaga draw people in from hundreds of kilometers away! The most famous ones are at Calle Larios, as well as the 3D mapping project on the walls of La Alcazaba. There are also several wonderful, albeit manmade, Christmas trees around the city.

“The Christmas markets in Malaga are not like the ones in Germany or Austria, they have their own flair”, says Victor and he is absolutely right. Instead of mulled wine, you’ll find handmade clothing and incense. Of course, sweet treats are a staple of Christmas markets anywhere. You’ll find some of Malaga’s Christmas markets at La Marina, near El Paseo del Parque, and Muelle Uno.

Nativity Scenes, called Belen, are an important tradition for Christmas and New Year´s in Malaga. You’ll find some of the most elaborate ones at the main Cathedral, the Town Hall, as well as the La Mosca district.

Rocio and Julia told us how important music is for Christmas and New Year’s in Malaga: “Villancicos (Christmas carols) are sung to the tune of guitars, “zambombas” (traditional percussions), tambourines, bells, and everyday objects like anisette bottles. Christmas Flamenco carols, called “Zambomba”, are really popular.” You can see the latter for free at the evening performances in Plaza de la Constitucion.

“It’s traditional here to combine holiday shopping with a light meal called “meriendas”, shared with family or friends.” told me Alejandro and added that I should definitely try the “chocolate con churros” (hot chocolate and Spanish doughnuts) for dessert.

Christmas celebrations are very important in Malaga and all of Spain, even though they have changed over the years, “On Christmas Eve, after dinner, going to midnight mass at the neighborhood church is a tradition. It’s not necessarily something we did in my family, but it does happen”, said Rocio.

Other traditions, however, seem to persist in every local family – having a great meal together, singing Christmas carols, and playing music.

I ask Victor about his favorite childhood memory from Christmas and New Year´s in Malaga: “I have very fond memories of my family cooking Christmas Eve dinner. And then my uncle would take us kids to  Malaga’s main park, filled with stalls selling Christmas treats as well as fireworks – back then those were still legal in Spain.” In the evening the entire family would gather around the table, share homemade delicacies and “try to solve the world’s problems”, as Victor jokingly put it.

Christmas in Spain is definitely a family affair and no restaurants would be open then. But if you want to recreate a Malagueño celebration as an expat, Alejandro recommends that you rent a house outside of the city and cook dinner with friends. To make it even more Spanish, learn some “Villancicos” or Spanish Christmas songs, and ask everyone to join in like they do at Rocio’s and Carlos’s families.

Rocio told me about a very special tradition, similar to April Fool’s Day – it’s when everyone is trying to come up with the most creative practical jokes to play on each other. “Go to Puerto de la Torre district for La Panda de Verdiales – traditional singing and dancing. It’s a lot of fun and definitely worth it!”, advised Rocio. It’s also the time to sip Malaga’s famous sweet wine.

Even though a lot of young people go out on New Year’s to one of Malaga’s central clubs and bars, for many, like Carlos, it’s still a family affair: “We have a big meal with lots of relatives, and roast each other.”

After dinner: “We gather around the TV to see the countdown that happens at Madrid’s Puerta del Sol. It’s broadcasted on every TV channel all over Spain. You have to be done with dinner before 12 but in my family it’s always a disaster because we talk, laugh, and eat for ages”, laughs Rocio.

Finishing up with dinner before midnight is important because of another unique tradition – the 12 grapes of New Year’s. Victor explains: “We eat 12 lucky grapes – it’s a fun tradition that started in the 1800s when farmers overproduced grapes. They sent them to the king of Spain and he started it all.” Now, in the last few seconds of the year, families and friends race to gobble down their grapes and whoever’s first will be the luckiest one of the year. Even though this is traditionally done at home, our TLR family coworkers told me that in the past few years it’s become increasingly popular for people to do it in Plaza de la Constitucion.

“We see the rest of the world opening their gifts on the 25th, but we have to wait a week and a half longer, until January 6th”, laughs Victor. According to Spanish tradition, the day of The Three Magic Kings or The Three Wise Men, is when families exchange gifts.

The day before, on January 5th, there is a huge parade that goes all over Malaga’s city center. It’s called Cabalgate de Reyes, and according to our Malagueño coworkers it is not to be missed. In the afternoon, street performers take over the streets of Malaga, while some local families, like Carlos’s, have big parties at their beach houses.

Every year, three men are chosen to embody the Magic Kings. And participants in the parade throw candy at the crowd from floats called “carrozas”. “When I was a little kid my dad would give me a piggyback ride during the parade and my jacket’s hoodie would fill with candy”, remembers Rocio.

All about the Food

Just like everywhere else, celebrating Christmas and New Year’s in Malaga means spoiling yourself with big, delicious meals. Victor tells me that Roscon de Reyes is a cake that comes with a tiny toy inside – whoever gets the piece with the toy would have the best year. Besides that, there are lots of other sweets involved – churros (similar to doughnuts) and hot chocolate, mantecado (watch out vegans and vegetarians – these are made with lard), turron (Rocio tells me that there are 3 main types – hard, soft, and chocolate), polvorones, roscos de vino, and borrachuelos.

The main course usually involves soups – sopa de picadillo, caldo de pintarroja, fish soup, consommé – every family has their own recipe. There is also a lot of meat and seafood at the table.

If you want to recreate Christmas and New Year’s in Malaga, Rocio was kind enough to share two traditional recipes with us – her favorite version of stuffed calamari and her sister Julia’s very special borrachuelos recipe.

For those of us who don’t have huge families and beach houses, there are still ways to celebrate Christmas and New Year´s in Malaga like the locals do. Victor´s advice is to go out into the streets and get to know the locals. Alejandro adds: “On December 25th and January 1st you have to go for a quick dip in the sea! Not only is it a local tradition, but it’s also a great hangover cure.”

And what are you doing over the holidays? Are you going to celebrate Christmas and New Year’s in Malaga and would you take advantage of some of the tips that our TLR coworking family members shared? Let us know down below or on social media!