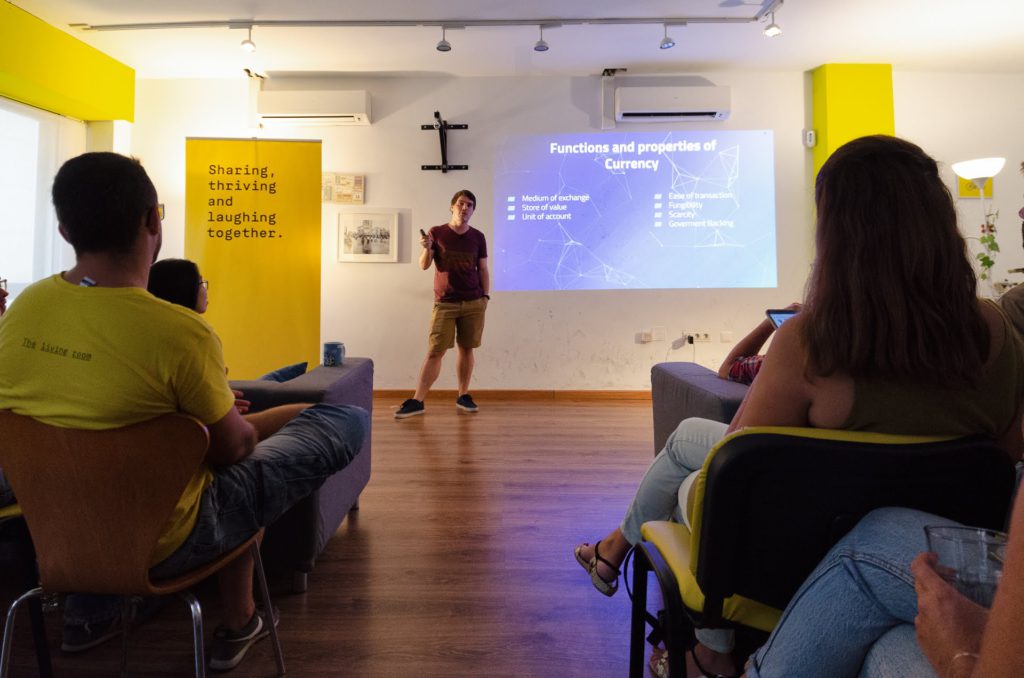 21 DecCryptocurrencies- An experiment that will lead to a revolution!???

As a former member of the TLR family, my aim for the TGIF and for this blog post is to give you a brief explanation of what blockchain and cryptocurrencies are, and their impact on our current financial system. Hopefully, you will gain a wider grasp toward this enormous and fascinating experiment, and perhaps look at it differently… just like the TGIF I presented at TLR, I don’t want to get too technical. There are several topics to aboard and this blog post could become long and boring!

Bitcoin: Bitcoin is a cryptocurrency. It is a decentralized digital currency without a central bank or single administrator that can be sent from user to user on the peer-to-peer bitcoin network without the need for intermediaries.

bitcoin (lowercase ‘b’): The currency (token) issued as a reward in the proof-of-work mining process.

Blockchain: A blockchain is, in the simplest of terms, a time-stamped series of immutable records of data that is managed by a cluster of computers not owned by any single entity. Each of these blocks of data (i.e. block) is secured and bound to each other using cryptographic principles (i.e. chain). The blockchain network has no central authority — it is the very definition of a democratized system.

Current system: FIAT. The system we use right now for currency eg: 5 euro note. Normally we assume that the money we have would be backed up by something, for example, gold, right? But not anymore! Unit of conversion: the dollar is the strongest currency at the moment. The problem is we have really rubbish systems, for example, SEPA works like a charm within Europe, but try sending that money from Colombia to Europe and you will encounter a more complex system to do it, full of bank commissions. It is basically an ineffective financial system.

Functions and properties of currency: Scarce, medium of exchange, store of value, unit of account, durable and portable, as you can see, in order to consider something as currency, there is no need for the government to back it up. It spreads as a whole, a wider concept of value in which individuals agree or not to these basic properties. Therefore something can be appreciated for its properties such as FIAT, but it does not hold any intrinsic value.

“Cryptocurrency an internet-based medium of exchange which uses cryptographic functions to secure the transactions.”

What is Bitcoin Mining?

Mining, or processing, keeps the Bitcoin process secure by chronologically adding new transactions (or blocks) to the chain and keeping them in the queue. Blocks are chopped off as each transaction is finalized, codes decoded, and bitcoins passed or exchanged. Miners not only are in charge to decrypt and get the “proof of work” (hard pieces of data to decrypt but easy for others to verify) to process the transaction to its destiny wallet. However, to generate new bitcoins by solving a cryptographic problem requires a considerable amount of energy to solve. Using special hardware (ASIC chips) to solve dense cryptographic problems. The reward is currently 12.5 bitcoins as well as the fees paid by users sending transactions. This amount of bitcoin gets reduced every time when the HASH rate is increased and the mathematical problem becomes more complex to solve. To prevent inflation and sustain the scarcity property, there will not be any more than 21 million BTC in existence. Once all of these are mined, there will be no way to produce more. There is not an estimation on when will this happen, but the less there are, the trickier the “puzzle” to solve.

The great things about Bitcoin:

It wasn’t just a coincidence that Bitcoin emerged in 2008 just after accusations that big banks were misusing borrowers’ money, duping clients, rigging the system, and charging boggling fees. Bitcoin pioneers wanted to put the seller in charge, eliminate the middleman, cancel interest fees, and make transactions transparent, to hack corruption and cut fees. They created a decentralized system, where you could control your funds and know what was going on.

1.      Fast and global: Transaction is propagated nearly instantly in the network and is confirmed in a couple of minutes. Since they happen in a global network of computers they are completely indifferent to your physical location. It doesn‘t matter if I send Bitcoin to my neighbor or to someone on the other side of the world.

2.       Secure: Bitcoin funds are locked with an intrinsic set of mathematical cryptographic rules composed of private and public keys that produce unique and impossible to decrypt. Strong cryptography and the magic of big numbers make it impossible to break this scheme. A Bitcoin address is more secure than Fort Knox. Unless you have access to the proper private key, you won’t be able to access them. Always remember that only the owner of the private key can send the cryptocurrency or access wallet or funds.

3.       Permissionless: You don‘t have to ask anybody to use cryptocurrency. It‘s just a piece of software that everybody can own. Just search and identify the proper BTC wallet for you, or dig deeper on your own to own in on cold storage wallets. After you a cryptocurrency wallet (Can be a bitcoin wallet) you can receive and send these tokens. No one can prevent you. There is no gatekeeper.

4.       Decentralized: The best thing about Bitcoin is that it is decentralized, which means that you can settle international deals without messing around with exchange rates and extra charges. Bitcoin is free from government interference and manipulation, so there’s no Federal Reserve System‍ to hike interest rates.

5.       Transparent: It is also transparent, so you know what is happening with your money. You can start accepting bitcoins instantly, without investing money and energy into details, such as setting up a merchant account or buying credit card processing hardware. Bitcoins cannot be forged, nor can your client demand a refund.

The not-so-great things about Bitcoin:

1.       Scams: Unfortunately, hacking and scams are the norms. They happen at least once a week and are getting more sophisticated. Bitcoin’s software complexity and the volatility of its currency dissuade many people from using it, while its transactions are frustratingly slow.

2.       Risk and Volatility: Bitcoin has volatility mainly due to the fact that there is a limited amount of coins and the demand for them increases by each passing day. However, it is expected that the volatility will decrease as more time goes on. As more businesses, media, and trading centers begin to accept Bitcoin, its’ price will eventually settle down.

3.       Lack of Awareness: Many people are still unaware of digital currencies and Bitcoin, people need to be educated about Bitcoin and apply it to their lives. Businesses are accepting bitcoins because of the advantages, but the list is relatively small compared to physical currencies.

Only invest the money you are willing to lose and nothing more. It’s not an investment that will return you 200% by the first year. Its investing purposes are different and more trivial and unpredictable. Be careful if you want to buy bitcoin. The financial suggestion is to invest 10% of what you can save monthly. As this is an experiment and it can fail, so it is important to be prudent and invest only that amount of money you are willing to lose. If you can, hold to it for the longest amount of time you can, as BTC aims to become the gold of the future, and if this happens you will win in a few year’s time. You will have great savings. If not, then you were expecting this money to be lost anyway so you won’t be disappointed when you do lose it. I advise to invest in it but expect to lose it too.

My name is Sergio Cortes. I am a business administrator with an emphasis on finance, certified as a Bitcoin expert by the Crypto Consortium. I had the chance to work in different areas from Marketing, sales, commerce, logistic, finance, and tech. I am currently part of a Fintech company aiming to be the biggest digital bank levering on the Bitcoin and Blockchain platform to expand on a worldwide market. Working in this company has allowed me to get the insight of the Bitcoin and Blockchain world and obtain information in different lectures from top Bitcoin leaders, including its developing and potential growth of the market and the potential usages for it. This has allowed me to have a wider grasp of our current financial system and how Cryptocurrency can disrupt it… What we will call the “financial revolution” and the break of an old paradigm.