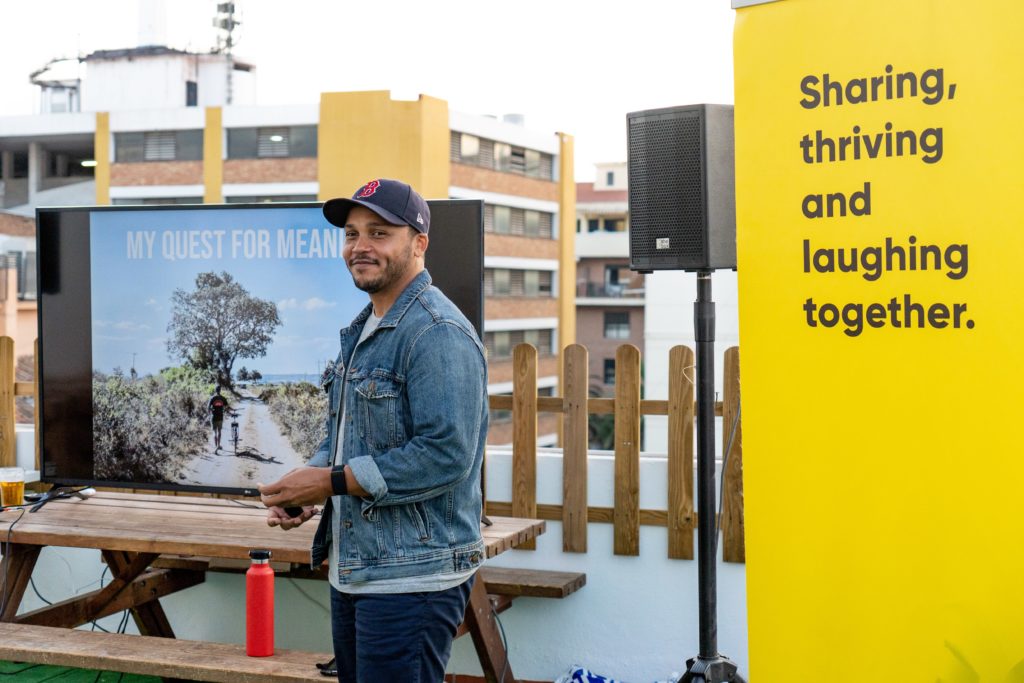 He may be relatively new to TLR, but LA native Eric McQuesten has a lot to say. Recently, Eric took to the podium on the sun soaked TLR rooftop (as part of TLR’s monthly TGIF event) to tell fellow members all about his life, his upbringing, and his ever evolving quest for meaning.

Growing up in LA, I was a really caring and loving child. But I was exposed to a very negative environment from an early age. I lived in a very dangerous neighbourhood where there was a lot of gang activity – lots of murders, lots of shootings. It was an environment that was pushing me to be something other than what I was, and I started to adapt to it. I started to dress differently, talk differently, use lots of slang. I made some bad decisions and started to exhibit some poor behaviour.

I wasn’t on a good path, but a number of things happened that made me rethink the direction I was going in.

The first such pivotal moment happened when my high school took a group of us to visit a prison. We interacted with the inmates, heard their stories… and I was horrified. We spent the day with them, ate with them (the food was disgusting). This was definitely not a place I wanted to end up. I didn’t immediately change after this, but I started to think about it.

The next moment that changed me: I was walking home one night with a friend and a car pulled up, rolled down the window, and started shooting at us. A drive-by shooting. We ran, and thankfully we didn’t get hit or injured at that time. But it really shook me and I knew I needed to change my life. So I started dressing differently and going back to who I had been as a kid. I started trying to change my vocabulary and I was even reading the dictionary every day and trying to find new words to use because I knew I wouldn’t get very far in the world if I didn’t learn how to speak properly. I was starting to change.

Then the last event that happened that really changed me… when my best friend was murdered. He was shot and killed. I began to really question the meaning of life after that happened.

I cleaned up my act. I got rid of the friends who were bad influences and just tried to escape, really. And I made it to college. But I still felt lost, and I became depressed. I knew I needed not only to escape but also to proactively do something good with my life.

So I went online and started searching for something to pull me out of myself – and I found a group called The Fuller Center for Housing which has a fundraiser where a group of people cycles from Seattle to Washington DC, stopping along the way to build houses for people experiencing poverty.

I signed up. I was ill prepared, and it was really tough – especially the first two weeks when my inner voice was really negative and telling me I’d made a mistake, I couldn’t do this, I would fail.

But then that started to change. The inner voice started saying things like: “Look how far you’ve come”, “Look how strong you are”, “Think of how great it’s going to be when you finish this”.

I felt that internal shift, and my depression started to drift away. My life took on a new meaning. I completed the trip, and it made me feel like I could do anything. I joined the same group on the same trip the following year, and I was a lot stronger. And after that I started my own non-profit, called One Pulse. While creating housing is a great cause, I wanted to address others issues also, such as climate change and healthcare and to affect change not only in the US but also outside of it.

Our first One Pulse cycle went from San Francisco to Washington DC and I recruited eight people for it. The whole cycle took three months to complete. It was a good trip, but I had a lot to learn and it taught me a lot about leadership, problem solving, and the needs people have.

Our second trip was a cycle from LA to NYC. And after this trip I decided I was ready for something even more challenging. Back when I first started One Pulse, I met a woman from Malawi who told me all about the issues people deal with there. I told her that when I had enough resources and enough experience I would take One Pulse to Malawi and try to assist there as much as possible.

Many people told me not to go. They said I wasn’t ready, it was too soon. But I did it anyway. Because life is short and if I don’t do it now, when will I do it? When will I be ready? We’re never fully ready for anything.

At the time, I had learned that for every 46,000 people in Malawi, there is only one doctor. And this is why I wanted to focus on raising money towards improving healthcare there, particularly outpatient services.

I created a route to cycle through Malawi, and recruited people to do it with me. It was an extremely challenging trip, and it was also a very emotional one because we could literally see the meaning that was being created for everyone involved. We also gained a great understanding of what it means to live more simply and be happier with less.

We were also faced with the very real and serious problems affecting people in Malawi, such as lack of access to clean water. There were many times when kids would ask for a basic necessity like water and you don’t know how to answer that. You would go to bed at night thinking about it.

At the end of the trip, we donated the bicycles to the healthcare workers in Malawi who have to cover miles and miles each day on foot to see patients. With bicycles, their jobs are made that much easier. Before the trip, we deliberately sourced bicycles that are in use in Malawi, so they would have access to parts to repair them when necessary.

As humans we get stuck in our own lanes and we don’t realize that we are connected to everything and everyone around us. We need to remember to connect with other people and help them whenever and wherever we can.

Life is short. So short. I talked earlier about my best friend who was murdered, but it wasn’t just him. When I was growing up four other friends were also killed. Life is short and you need to act now. Don’t wait.

Be useful. Do hard things. Create meaning in your life, and create it now.

As well as running the non-profit organization One Pulse, Eric is an extremely talented video producer and photographer with a passion for web design, web development and SEO. While he is originally from LA and is a US citizen, Eric is currently living in Malaga, Spain and working remotely from the TLR office in Malaga’s vibrant Soho area.

For more information about One Pulse, check the organization out on Instagram @rideonepulse.