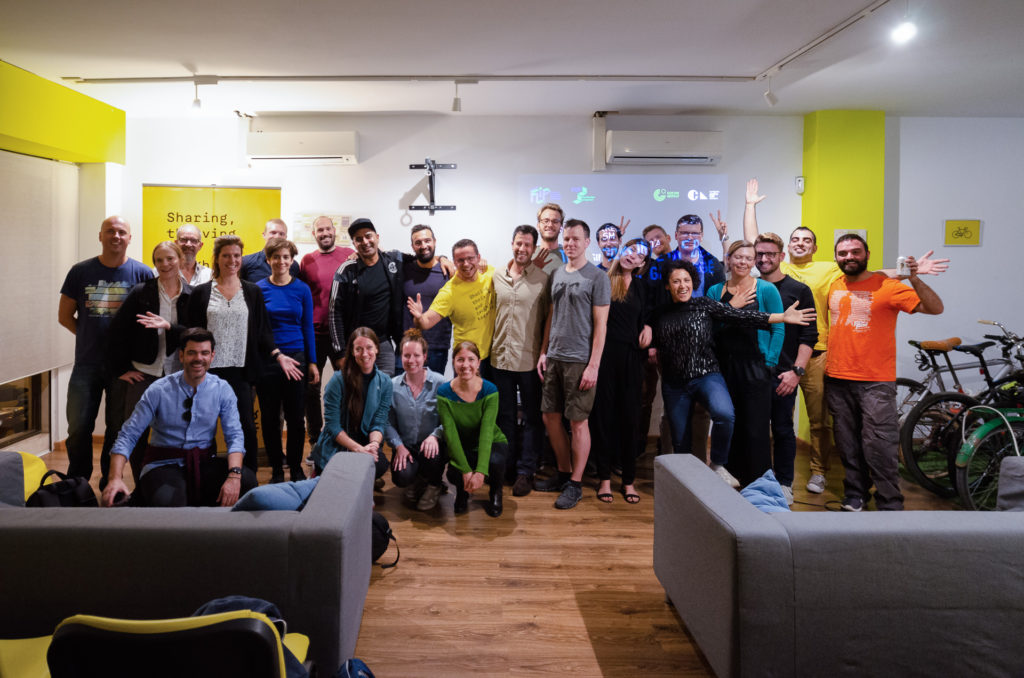 For the last 4 years The Living Room has formed part of the European Creative Hubs Network (ECHN), a great association of creative hubs all around the continent founded out of a program sponsored by the European Union.

Whether you call it coworking spaces, fab labs or creative hub, they all have one thing in common: to serve creative minds by creating a shared ecosystem of talents and resources everyone can thrive in. Even though it’s considered “the new way of work”, hub owners and community managers still often feel isolated. ECHN was founded with the intention of bringing them together into one network to learn from each other’s experience to better serve the cultural and creative sector.

As part of that mission ECHN recently launched a new peer-to-peer (P2P) exchange program co-sponsored by Creative FLIP and Goethe Institut, financed by the European Commission. The P2P program gives members of ECHN the chance to travel and meet other hubs to learn from each other. The Living Room Coworking invited Stone Soup, a coworking spaces located in Athens, over for a week to Málaga and this is what we learnt.

Olga Paraskevopoulou, Managing Parter at Stone Soup, actually started her hub as a talent pool after she came back to Greece from the Netherlands, where she lived for various years. Having meet inspiring people with great ideas back in Northern Europe she successfully connected them with talented folks down in Greece and set up project teams to make those Northern dreams come true.

We ran exciting projects, which we would call “pressure cooker”. The idea was for the customer fly over to Athens and work with the team to build an MVP in a timeframe as short as 2 weeks.

TLR is currently working on a very similar initiative, but the project is still in its infancy: TLR Agency. The idea is very similar to what Olga did in the past: You set up a pool of talents and create amazing synergies amongst the individuals by have them collaborate with each other on projects coming into the hub from the outside world.

Many valuable tips were shared with The Living Room to avoid mistakes from the get-go and make TLR’s agency a successful concept. One of the biggest insights for TLR was probably that the management involvement needs to be reduced to a minimum and a powerful team needs to be established to run the agency as a separate business unit broken out from the organisation’s coworking business.

Technology can do wonders

At the beginning of the year Ben Kolp, Co-Founder at The Living Room Coworking, has launched the coworking management software Office R&D to optimize the daily operation of TLR. As mentioned above, Olga started Stone Soup as a talent pool and only recently set her focus more on coworking as such. TLR’s experience in optimising and automating the space management side of things, was a very welcome exchange of knowledge.

Our on- and offboarding process for new family members was very manual and tedious. As we grew, the amount of admin work took our focus off the important thing, which is to be in direct touch with our family members.

It’s key to be “human” in a digital age

Olga didn’t travel alone. She was joined by one of her coworkers: George Carey-Simos. George is a digital strategist, consultant, and co-founder & COO of wersm.com – We are Social Media. As an all-round “digital problem-solver” George helps people use the internet to their advantage.

We planned this P2P exchange so it coincides with TLR’s monthly Thank God It’s Friday (TGIF). We invited George to be a speaker at the event, which he kindly accepted. Given his background, he spoke about the importance of ‘Being Human’ in a digital age.

As the world around us becomes more complex, digital marketers have been tempted to take the easy way out; over-automating, hypertargeting, or treating real people as a bunch of metrics. We looked at how the simple concept of “being human” is key to successfully promoting ourselves – or our businesses – online.

Stone Soup visited TLR from Oct 21st – 25th. It was an intense 5 days full of knowledge, emotions and great learning for everybody involved. If you run a creative hub and want to benefit from the European Creative Hubs Network too, head over to our website and sign up as a member.

Ben Kolp launched The Living Room Coworking, rated Málaga’s best coworking space in 2018 and 2019 by the users of Coworker.com, in 2015. Since then it has been a passionate journey of many digital nomads, freelancers, entrepreneurs and remotes workers entering and leaving the space creating a vibrant and international community.


This P2P exchange was organized by ECHN and Creative FLIP with the support of Goethe Institut and the European commission.

Creative FLIP (Finance, Learning, Innovation and Patenting) is a pilot project co-funded by the EU, whose main objective is to support healthy and sustainable ecosystems for Cultural and Creative Industries (CCIs) with respect to these four key policy areas. Through different activities such as research, stakeholders consultation, preparing and testing guidelines, the project aims to improve the finance and patenting ecosystem in order to strengthen CCIs’ capacities for growth and development through improved access to finance and value recognition, as well as their capacities to capture value from IP. In order to achieve the cross-sectorial benefits for the CCIs, the project will strengthen support structures for the CCIs through organizing mutual learning opportunities between Creative Hubs themselves (P2P), as well as between them and formal and informal education institutions.

The European Creative Hubs Network is a peer-led network with a mission to enhance the creative, economic and social impact of the creative hubs. There are many existing creative and cultural networks in Europe, however, none are specifically tailored to support physical spaces that provide services to multiple creative businesses, which we define as a ‘‘creative hub’’. As focal points for creative businesses, hubs offer the most effective way to support the growth and development of creative industries. To achieve this, hubs themselves need to network, to pool resources, share best practices, and build on advocacy, policy and opportunities.