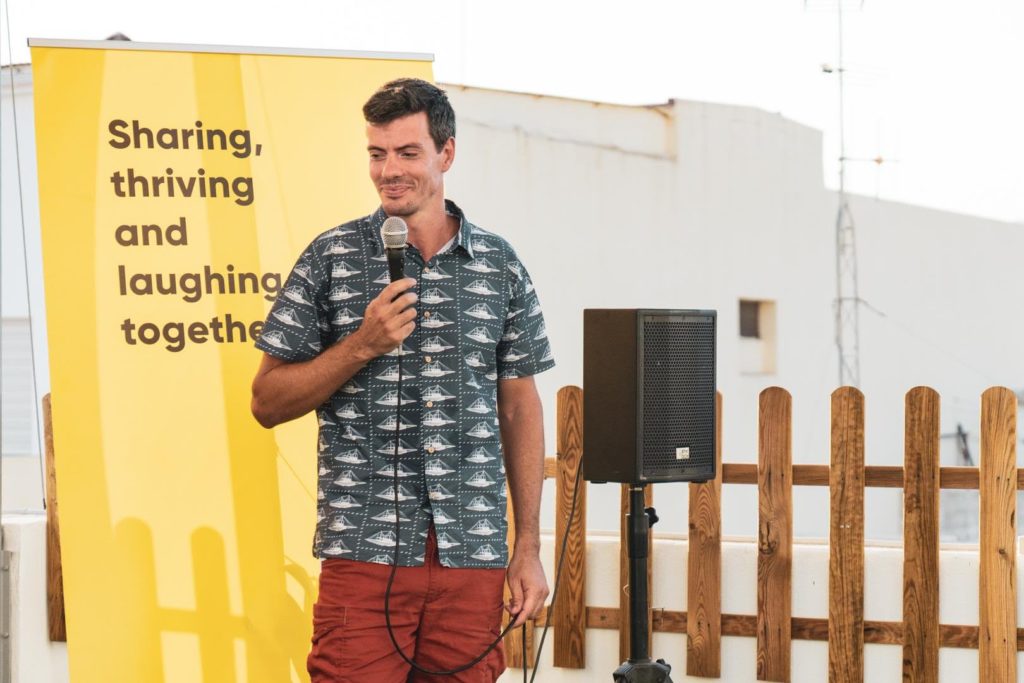 As part of TLR’s monthly TGIF series of rooftop talks, valued member Thibault Lefèvre took the mic to share his personal healing journey – from injury and depression to overcoming the many obstacles life throws at us.

As a young man, I was very much into rugby and was fortunate enough to be recognized as a good player. I ran very fast, and I got the nickname Forrest – referencing the movie Forrest Gump.

But then I sustained a ligament injury which was serious enough to end my professional aspirations. It was also the start of a long road of recovery and the start of many years of frustration – not only physical, but also psychological.

At the same time as this first injury, I had to make a choice about third level education… and I now know I made the wrong choice. I went to the wrong school. I left my city, and my friends, to go and do something I didn’t really want to do. But I stuck with it and I did finish it and at the end of my studies I completed a few months of work experience in the area of design – specifically in relation to designing kitchen areas.

I found that I did like it, at the time, and I liked the work experience, and my employer wanted to bring me on full-time. My boss told me to go on vacation after the work experience ended, and that they would hire me when I got back. So I went.

Here I was, roughly 21-years-old, enjoying my vacation and ready to start my professional life… when I got a phone call from my boss, saying they had promised me something too quickly, that the circumstances had changed and they wouldn’t be able to hire me after all.

At that point, I had had enough. My sports career ended before it had even begun, and now the same thing was happening in my professional career. So what did I do? I ran away.

Thibault 1.0: Travel as a means of escape

I told my parents I needed time to think about what I wanted to do with my life… but really I just wanted to have fun. I went to Australia, New Zealand, a few countries in southeast Asia, and when I came back, one year later, I still had no idea what to do with my life.

So I took the first job I could get, and became a restaurant manager – which is the perfect profession to cancel your social life, add a ton of frustration, and make very little money. I didn’t like it and in the end I decided to go back to something I had already liked – designing. This did make me feel a bit better, but throughout the years the physical injuries kept piling up. Ever since that first ligament injury, I kept developing physical issues.

At one point, I started to do triathlons. This quickly became an obsession, however, and I ended up building my entire life around it. I was doing triathlons, I was socialising only with others who were into triathlons, I was talking about triathlons all the time… and all the while I was injuring myself more and more and spending a lot of time seeing specialist doctors to try and fix myself.

For a while, things were good. I had discovered a love for triathlons and I was back designing. But the injuries kept piling up, and the work quickly became boring. I was living in an awful apartment, and there were some personal issues also. I wasn’t getting what I wanted out of life, and I was angry all the time.

So what did I do?

I ran away. Again.

I went to South America this time, and I began a very ambitious cycle across many countries. It was tough, and I had injuries still, but I began to feel better about life… but at some point the injuries became too much. My knee was hurting, my back was hurting, and there was a time when it wasn’t fun any more, so I returned home and moved back in with my parents. And the bad feelings returned – I’m in a lot of physical pain, the career questions are still there, the personal problems are still there… and so what did I do?

I ran away. A third time.

This time I went with only a backpack. A backpack and all the physical pain. Along the way, I reconnected with a friend and decided to join her in Thailand. She knew of my physical pains, and that I had not been feeling well, and she told me to join her for two months and she would try to help me. And so I did.

I called her my Tiny Thai Thanya, because I’m very tall and she is very short.

She’s a yoga teacher and I went to visit her in Thailand, where she is from, and then Nepal, where she was travelling to, and I gave her permission to take charge of the next two months of my life. Every morning I was waking up at 6am, doing yoga, and her watching me to see how I eat, how I sit, how I walk in the streets, how I stand. Then in the afternoon – more yoga.

I started to feel better and was able to run again which, at that point, I hadn’t been able to do for many years. I regained some confidence.

It didn’t improve every pain, but I was feeling better and seeing improvements just by changing my lifestyle. And at the end of those two months in Thailand and also Nepal, I decided to end the journey and return to France.

Thibault 3.0: The best version of myself

A personal best – upon my return to France I experienced four whole months without any new injuries! It was amazing… until it wasn’t.

I attended a wedding and at the wedding I ran into all of my old triathlon friends – the ones who knew me as the guy who was always injured. They even had nicknamed me Abou after the football player Abou Diaby who is known for always being out with injuries.

The morning after the wedding, I woke up and I was in so much pain I couldn’t even walk. This lasted for around one year.

But something had changed. I decided not to run away any more. And then something amazing happened – I discovered a woman who I can only describe as a healer.

My physiotherapist recommended her to me, after he found he was unable to help me. I decided to try it. I would go to her office and lie down on a table and she would put her hands on my stomach and keep it there, in silence, for around 10 or 15 minutes. Then she would start asking me questions: What happened at Christmas when you were three-years-old? What happened in July of 2018? All these strange questions. Some I didn’t have answers for… but some I did. I realized she was pinpointing times in my life that had been particularly stressful or frustrating or harmful in some way. Together we talked about these moments and what they represented. Then I started to go to a psychologist.

Slowly, my pain began to go away. Not all at once, but gradually. And it was then that I realised how linked my body and mind truly were. I began to understand that, for me, the connection between body and mind is a lot greater than I had ever known. Everything was interlinked.

Thibault 3.0: The link between body and mind

The sciatica pain was linked to the fear and discomfort of being unsettled, of not having a place to call home, of not feeling part of a group, of belonging nowhere.

A locked jaw represented my inability to express my feelings and emotions. Pain in my left shoulder was related to my mother’s pain. A general tension in my body was related to a lack of balance in my life – too much sport, too many parties, not enough happiness in work life, and not enough communication with family.

When I learned these various connections, and there were a lot more than those I’ve listed, I learned not only how to deal with them but also how to stop making new ones – how to live a happy, healthy, and balanced life.

Here is a summary of my current methods:

This is my personal healing journey, but I’d love to hear yours in the comments below.

Thibault is a specialist in Commercial Kitchen Design and Planning. Passionate about project design, he first started in the profession as an asembler’s assistant on installations, before taking a position in a bureau d’études. He immediately wanted to manage the projects he was working on, becoming a Project Manager. Then, finding himself in a small, fast-growing company, he had the opportunity to become Responsable du Bureau d’Etudes, with all the associated functions, a non-existent position before his arrival to the company.

Thibault is a current member of The Living Room coworking space which is located in the vibrant Soho area of Malaga, Spain.