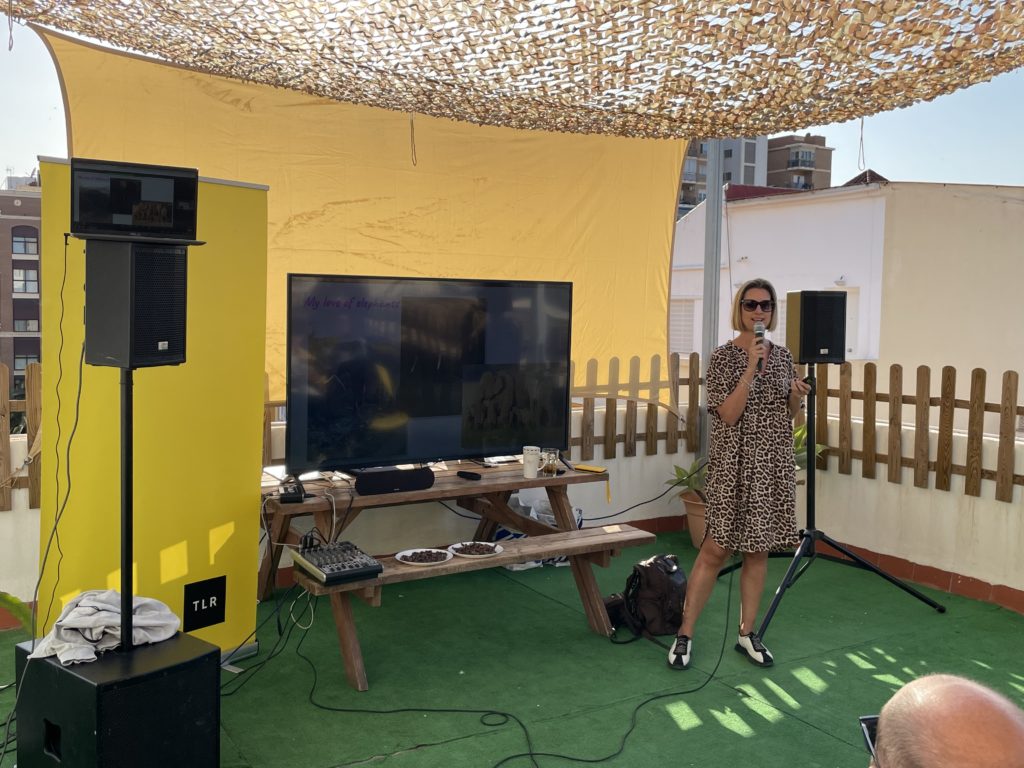 Growing up so close to the wilds of the South African bush is a truly unique experience, which is why our member, Johannesburg native Lauren Coppin, decided to make it the focus of her recent TGIF talk. Presenting on the sunny TLR rooftop recently, Lauren regaled the crowd with tales of the bush.

I was born and raised in Johannesburg, where every day is an adventure. Personally, from a young age I developed a love of the South African bush, which is why my family started calling me a Bush Baby.

Elephants are particularly fascinating to me. I love them. I’ve gone on many treks in my lifetime to look for elephants. I find the whole matriarchal element of elephants super fascinating, as well as the way in which they communicate. That’s why my first story is about an elephant encounter.

This story takes place in Pilanesberg. This area has a really big concentration of the Big Five (Lions, Leopards, Rhinos, Elephants, and Buffalo). You can pretty much see all of these animals in only a few days.

On one particular day of the trip, we came a little too close to an aggressive bull elephant.

If a young male elephant gets too big for their boots, they have to leave their family. They wait for mating season and hope they get lucky and can start a new family. But before that happens, they are on their own and very aggressive. You definitely don’t want to piss off a solo male elephant because they won’t back down and you’ll be in serious trouble.

Big african elephants can roll over your safari vehicle in a second if they really want to. They can also run faster than the vehicles can go. If one really wants to get at you, there’s not much you can do.

So we come across this elephant, while in a safari vehicle, and he’s not happy about it at all. We’re in his territory and he sees us as a threat. He got more and more irritated and started to follow us.

Thankfully, the guide was great and really knew to get the hell out of there fairly quickly, and we eventually lost him. But it was an amazing, and somewhat scary encounter and a reminder of how quickly things can go wrong in the bush.

In Pilanesberg I went elephant trekking on foot.

We were trekking in the bush, and suddenly came across rhino excrement. A rhino is not an animal you want to run into on foot, so we immediately turned to go the opposite direction.

We thought we were walking away from the situation, but instead we basically walked right into, and disturbed, a sleeping black rhino.

He gets up, shakes himself off, he’s a little bit confused. The game ranger tells us to get on the ground behind a bush and not to run.

We knew not to run because once we run, we’re prey. So whatever you do, you just don’t run. This is easier said than done.

The game ranger did have a gun, but black rhinos are very protected. And when it comes to your life or a black rhino’s life, sometimes the rhino’s life takes precedence.

So, with us behind the bush, our game ranger decided to open his arms out, yell, and run at the rhino.

The rhino got a shock and turned away, so we started marching (not running!) in the opposite direction. There was a danger the rhino would want to track us down to see what had come into his territory so we went as fast as we could.

We made it to the vehicle. Then we realized the rangers were actually pretty shaken. They said if they had shot that rhino then they would never have gotten work again. Even though they would have done it to protect someone.

My final story takes place in Chobe on a self-drive safari with a friend of mine.

Chobe is unlike other game drives in South Africa – it’s wilder. It doesn’t get as much footfall as other reserves.

But there’s a nice concentration of elephants in Chobe, which is why I wanted to go.

Unfortunately, due to it being rainy season, our self-drive safari vehicle became stuck. It was almost four hours before we got free. By that time, we weren’t able to return to our origin OR make it to our destination before dark.

So we kept driving for a bit, making it through floods where the water was almost up to the vehicle window, and came to an area that looked like a campsite. The area had flat ground and we thought it would be a good place to camp, barbecue, and have a few drinks. In South Africa, when you have a drink as it gets dark, it’s called a sundowner.

We ate, drank, had a great night celebrating our survival, and went to bed.

We’d agreed that if we needed to use the bathroom during the night we would wake the other up to keep lookout. I needed to go during the night, but I felt bad about waking my friend… so I didnt. I crawled out of the tent and did my business. Everything was fine. I went back and fell back asleep.

In the morning we woke to this guy outside yelling and screaming. He was the game ranger of the area. He was like ‘Are you stupid? You could have died.’

We had no idea what was going until he showed us the prints all around the campsite. There had been lions all around us. They had even jumped up on the vehicle. There were also hyena prints everywhere. They had likely followed behind the lions. Hyenas are probably even more dangerous to come across because they are more opportunistic.

The ranger explained the area even had a 7pm curfew because these lions had been known to eat people. It was a sobering experience, to say the least, and it could have been a costly mistake.

Everything turned out fine in the end, however, and despite the near miss (and previous near misses) I’m still a huge fan of the South African bush. It’s an amazing place made all the more beautiful because of its refusal to be tamed. I will always return there, and I will always be a Bush Baby at heart.

Lauren was born and bred in South Africa, but has had a foot in both the UK and Johannesburg all her life.

Now residing in Málaga, Spain, Lauren has been a member of the TLR coworking space since 2021.

She currently works as the Global Director of SAAS Partnerships at Make, the leading visual platform for anyone to design, build, and automate anything – from tasks and workflows to apps and systems – without coding.