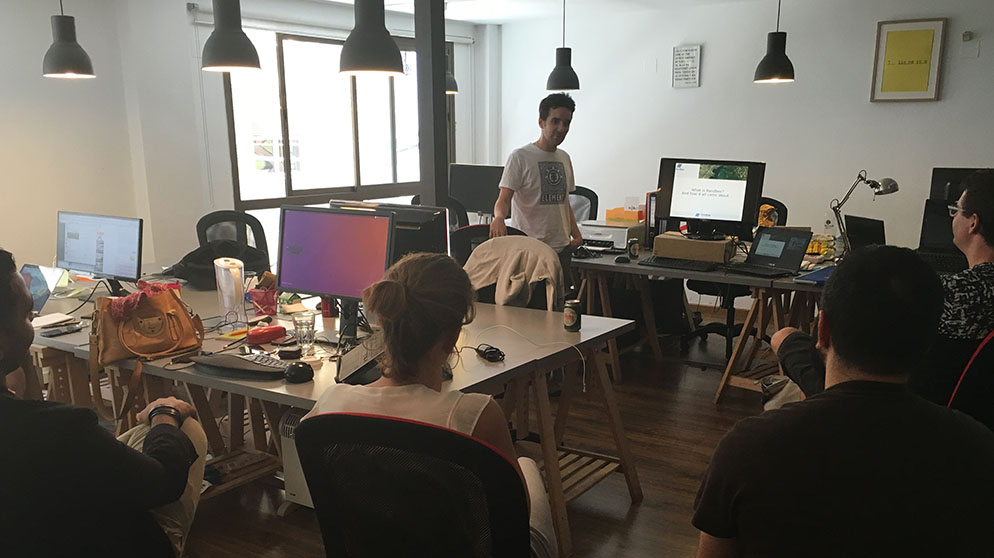 27 NovThe birth of an awesome coworking community in Malaga

3 Danes and 1 Frenchy moved to a house that they shared in El Palo to work remotely with consulting, online marketing, social media hacking and coaching. The internet in El Palo sucked bigtime, so shortly after they looked for a shared office in the city center with better internet.

An office space in Plaza Felix Saenz was rented and called Copenhalaga. I’m sure you can guess the reason for the name, can’t you? The first people to move in were the guys from the El Palo house and their new Spanish friends who have magic skills within Computer Science and Graphic Design. The companies Plytix, Digital Excellence & Brigada were quickly founded in this office. After an awesome housewarming more people started moving in. This included people from Spain, Denmark, Norway, Germany, Holland, Argentina, USA, UK, Sweden, Italy and more. The international family was founded.

The office in Plaza Felix Saenz was full with about 10 people, so we rented a more spacious office in Malaga’s Soho area (also because the Soho is awesome). All the companies in the office had space to grow here and they did, so quickly there was around 15 people in the office. Even more nationalities came in and the community kept growing.

Copenhalaga stopped being a shared office space and officially became a licensed coworking space and was renamed The Living Room Coworking. Since then the amount of people in it has increased up to about 20 people making the community even greater and more fun.

The Living Room had the opportunity to grow the space by an additional 100m2, which they did by knocking down some walls and connecting the neighbour office space to the existing one. The Living Room Coworking can now start offering more than 30 permanent desks, over 10 hot desks, a lounge area featuring a ping pong table and much other great stuff on a total surface of close to 300m2.

We expect more people to come in, so the community can grow even further. We plan on doing many more events including #TGIFs (basically drinking beer and having fun after work on Fridays), dinners, art exhibitions, workshops and other cool stuff. If you want to join the community send us a message on Facebook. To follow The Living Room and maybe join an event or two, check out our Facebook page.