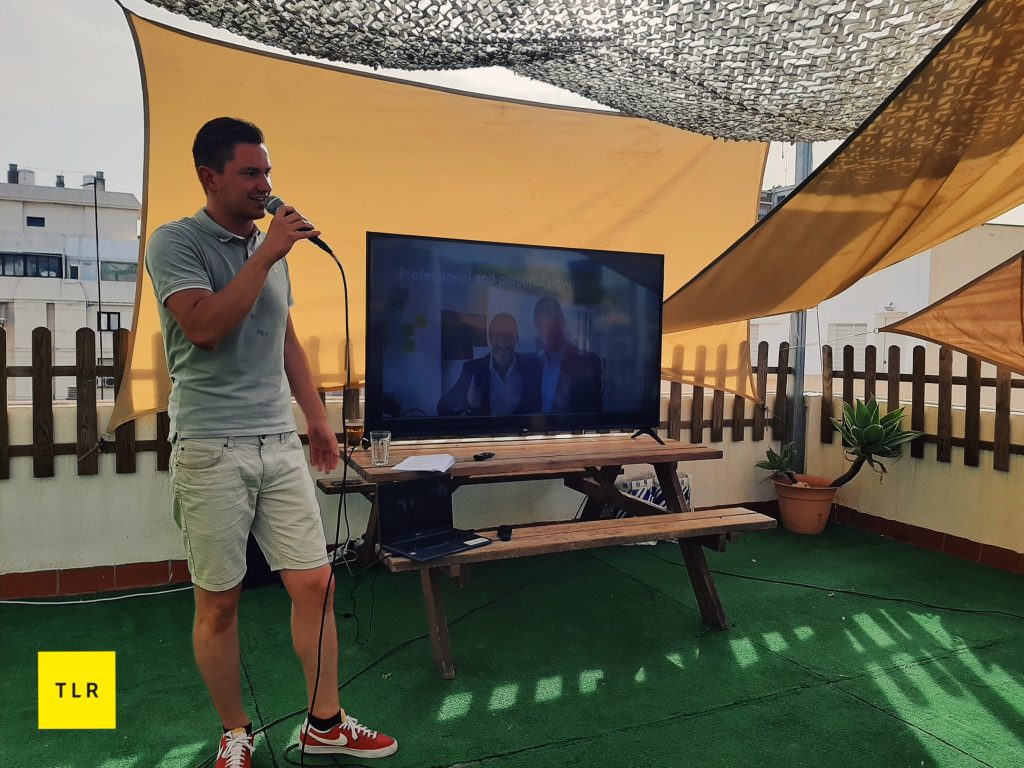 09 AugWhat I Learned From You: The Story of a TLR Intern

Now that a few weeks have passed, we can finally look back on our dear intern Wesley’s final days with us with dry eyes. Wesley finished up his internship in true style, hosting a rooftop TGIF talk detailing some key lessons he learned while working at TLR.

The last five months have gone by so, so fast. But it’s like the old saying: Time Flies When You’re Having Fun. I think that’s exactly what happened.

My internship here at TLR has been a lot of fun, but I’ve also learned a lot and developed further both professionally and personally because of it. Here are some of the main lessons I learned along the way.

Learn from your mistakes

The very best way to learn is by making mistakes. Everybody makes mistakes, especially in the beginning, but it is actually the best way to improve and learn.

At the very start, I made a mistake when I went on a night out in the city. I wasn’t very careful with my phone and somebody stole it. It was a bad experience and it made me question what I was even doing here in Málaga. Was this city really meant for me? Should I just give up and go home? But I thought ‘No, I’m going to do this, I’m going to stay’. I learned from that mistake and I’m glad I stuck it out because my time in Málaga turned out to be truly fantastic.

Don’t be afraid to take risks

You need to take risks in life in order to learn new things. You never know how it’s going to turn out, but if you don’t take the opportunity then you’ll never know.

For me, leaving my home country of The Netherlands and moving to Spain, to a new country where I had never lived before and didn’t know anyone, was a huge risk.

Another risk was betting on my level of English improving. At the start, I was very worried that it wouldn’t. I thought perhaps my English wasn’t good enough to speak to people here. And I also wondered how I would speak to people who weren’t close to my age.

But in the end my language skills did improve, and I realised age really didn’t matter so much. At least not in TLR. In other words, I took the risk, and it really paid off.

A collage of the highlights of Wesley’s internship with TLR.

Get out of your comfort zone

I’ve experienced a lot of things in Málaga that have required me to come out of myself. At the start, when I didn’t know anybody here, I was going alone to restaurants. Previously, if I saw someone alone at a restaurant I would have thought that was strange, and I never would have done it if I’d had a choice. But it wasn’t bad at all!

Later, I even went on some road trips on my own to other cities to go sightseeing. Before I came here, I would have thought that was really weird. But actually I really enjoyed it and it helped me become more independent and grow further as a person.

The language barrier also put me outside of my comfort zone. At least I have some level of English, but I don’t speak Spanish at all. Outside of TLR, a lot of times I would need to interact with people who only spoke Spanish – like in the bank, for example. It was frustrating and difficult and sometimes I just wanted to walk away… but I had to take it as an opportunity to learn. I had to come out of my shell and just figure it out. And it always worked out ok in the end.

Do what you love

One of the main lessons I learned at TLR was that work and fun can be combined. Work doesn’t have to be boring, and a chore. If you’re doing something you love, then it won’t feel like work at all. Fun and work… they’re not necessarily two separate things.

For me, working in TLR was so much fun that it often didn’t feel like work. Part of the job is talking to people and socialising with them. But I also learned from the people at TLR that a lot of them do what they love and so they find their work fun also. It’s definitely a lesson I won’t forget – and it’s one I’m glad I’ve learned relatively early on in life.

Those who attended Wesley’s TGIF talk, gathering to say one last goodbye!

Overall, I am so happy with how my internship has gone. I think I arrived at TLR quite child-like, and I feel like I’ve grown up five more years in the last five months.

I learned valuable skills that I can apply in the future in both my professional and personal lives – I’ve improved my communication skills, my presentation skills, my language skills, and I’ve become far more independent.

Before my internship here, I was a person who thought: “Oh, someone else will do it”. But then I started to realise the value of being the person who did it, who stepped up and acted. I found myself being more proactive… and I learned you have to be the person to act, if you want to make a change.

I also learned to ask questions – that it is better to ask questions in the beginning, even if you think they are silly questions, because it will save you time later on if what you do isn’t what was wanted.

On a personal note, I learned to value the amount of work my mother puts into the household back home in The Netherlands. I’m 22 and living at home I don’t need to cook or do laundry. When I moved to Spain I started to realise how much my mom actually does. It made me appreciate her a lot more, and all that she does.

Wesley raises a glass to TLR, as a smiling Ben looks on with pride.

I am sure I will come back to Málaga and to TLR some day to visit, but for now my time here has come to an end.

I will forever be grateful to Ben for having me here at TLR these past five months, for teaching me, laughing with me, and always having faith in me. Thanks Ben, and thanks also to each and every TLR member who chatted with me, helped me, played ping pong and volleyball with me, gave me food recommendations, told me about cool places to go in Málaga and outside it… and to everyone I met over the last five months for all the great memories we made together.

My internship at TLR was extremely special – it was an experience I will never forget. Thank you for being a part of it.

A native of The Netherlands, Wesley Hermans is a 22-year-old student of Commercial Economics, studying at Fontys School of Business and Communication in Eindhoven.

As part of his studies, Wesley needed to complete two internships. His first took place over the course of five months at the TLR coworking offices in the vibrant Soho area of Málaga, Spain. Wesley lost no time at all in making himself a valuable part of the TLR team, fulfilling the role of Community Manager.